About the Atlanta Botanical Garden

The Atlanta Botanical Garden is an urban, non-profit Garden located just three miles from the city center in midtown Atlanta. Because of its proximity to downtown, the Garden is well situated and hosts a wide variety of public and private events and exhibitions. It occupies 30-acres adjacent to Piedmont Park, the most heavily-used public park in the city. The Garden encompasses 13 acres of woodland and 15 acres of cultivated gardens. Included among these gardens are two acres for the Children’s Healthcare of Atlanta Children’s Garden (1999), along with the Dorothy Chapman Fuqua Conservatory (1989), the Fuqua Orchid Center and Center for Education and Conservation(2002), Gardenhouse, the administrative center (1985), and Mershon Hall for youth education and meeting room(2003). The Garden was organized by a grassroots group of citizens in the mid-1970s without benefit of financial bequest nor estate grounds, and is privately funded under the leadership of the Board of Trustees and the Executive Director, Mary Pat Matheson. Responsiveness to the surrounding community has always been its touchstone. In Nov, 2007 the Green Expansion Plan broke ground, to build a LEED-certified Visitor Center with green roof, a green parking facility tucked into a steep hillside, a Canopy Walk soaring 40 feet into the tree canopy, a 95,000 gallon cistern to harvest stormwater runoff including a cascade and edible plant gardens.
Smithgall Woodland Garden is a 185-acre satellite garden 60 miles northeast in Gainesville, Georgia, which opened to the public in 2014.

Atlanta Botanical Garden has made significant progress in developing a variety of techniques for the conservation of the Florida Torreya, one of the rarest conifers in the world. Current efforts include evaluation of the current status of the species, estimation of remaining genetic variability in the wild, and efforts to reintroduce the species into areas where it has been lost.  Seed production in ex situ collections has increased dramatically, increasing diversity of this species in cultivation and availability of plant material for safeguarding and research.

Torreya taxifolia, known as the Florida Torreya, is one of the rarest conifers in the world. Once found as a canopy tree, Torreya is an evergreen dioecious tree endemic to a narrow range of bluffs and ravines adjacent to the Apalachicola River in northwest Florida and extreme southwest Georgia. In the mid-20th Century, this species suffered a catastrophic decline as all reproductive age trees died. In the decades that followed, this species did not recover. What remains is a population approximately 0.3% of its original size, which is subjected to changes in hydrology, forest structure, heavy browsing by deer, loss of reproduction capability, as well as dieback from fungal disease.

Atlanta Botanical Garden’s dedication and efforts to protect Torreya furthers understanding of its ecology and life cycle as well as the decline of this once majestic species.  In 1990, Atlanta Botanical Garden received 155 clones of T. taxifolia propagated from the remaining natural population by Arnold Arboretum and the Center for Plant Conservation. This material has been safeguarded at the Atlanta Botanical Garden since that time, and propagation efforts have increased the collection to include almost 1,000 plants, including nearly 500 distinct vegetative clones from the wild. One of the limiting factors to ex situ conservation of this species is the inability to use conventional seed storage techniques for preserving germplasm. Torreya taxifolia produces recalcitrant wet seeds that cannot be dried for storage in freezers. Therefore, until recently the only way to maintain ex situ germplasm was through living collections. In collaboration with Georgia Institute of Technology, a somatic embryogenesis tissue culture system was developed to initiate cultures, produce somatic seedlings and cryogenically store cultures of T. taxifolia. 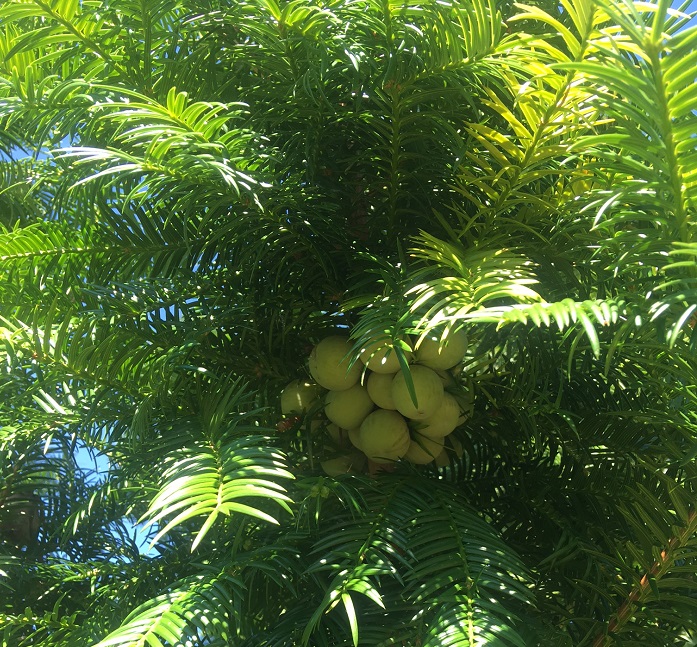 Torreya taxifiolia seed orchard (a collaborative project between ABG & UGA) - This female tree was grown from lateral cuttings and, along with 20 others, was planted in 2000. Nearly 5,000 fruit were harvested in 2016

One Woman's Fight to Save Endangered Shrub