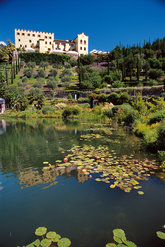 The Gardens of Trauttmansdorff Castle were created from the ground up in 1994, opened in 2001. Located as it is in a mild climatic zone, the city of Merano offers optimal conditions for growing exotic and mostly evergreen plants, that would not normally survive north of the Alps. Encircled by the snow-capped Gruppo di Tessa (Texelgruppe) Mountains, Trauttmansdorff features more than eighty garden landscapes spread over twelve hectares.

Trauttmansdorff is divided into four garden worlds: Forests of the world, the Sun Gardens, the Landscapes of South Tyrol (Northern Italy) and the Water and Terraced Gardens. While the latter features historical European garden architecture, the central theme for the three other garden worlds is a comparison of natural and cultural landscapes. The plants in this garden landscapes are grouped by their geographic origin and form a multitude of vegetation and landscape typologies.
Trees and shrubs have been planted in a way to reflect their natural plant communities as closely as possible. Great importance has been placed on the connection between natural vegetation, climate, location and the intrusion of mankind. This allows natural forest societies from America, Asia, the Mediterranean and South Tyrol like a Alluvial Forest of the Mississippi, Japan or South Tyrol to be viewed alongside agricultural landscapes of the Rice Paddy Fields, the Olive Grove or a local vineyard.

The Gardens of Trauttmansdorff Castle complex is a unique fusion of nature, culture and art. Ten botanically themed Artist Pavilions, a blend of historical and modern architecture, blossoming highlights and fascinating fauna come together to create a very special spirit of innovation. Trauttmansdorff offers also a wide range of events, guided tours and special exhibitions. The exhibitions present an Array of botanical Topics, including “The Birds and the Bees” (2014), “Root, Bulb & Co.” (2012), “Heavenly Scents, Ungodly Stench!” (2010), “All about Palms!” (2008) or “The Myth of the Ginkgo” (2006). The exhibitions are designed to be every bit as exciting and interactive as the content is multifaceted, and endeavour to engage all the senses.

As South Tyrol´s most popular tourist destination Trauttmansdorff recorded more than 415,000 visitors over the course of the 2017 season from 1 April to 15 November. The botanical garden was created by the Laimburg Research Centre of Agriculture and Forestry, South Tyrol´s leading centre of expertise for agriculture, and now forms part of the Agentur Landesdomäne/Agenzia Demanio Provinciale, a public administration department of the Autonomous Province of Bolzano – South Tyrol.

Flowering Clay Wall: Plant species for sites at risk for erosion
This near-vertical flowerbed enables research on the growth behavior, especially root development, of different plant varieties and species. The goal is to learn the optimal method of planting steep, erosion-prone slopes and stabilize them permanently in an aesthetically pleasing manner.

Pollinating Fauna
A second project investigates pollinator fauna and documents the value of Trauttmansdorff as a refuge for animal pollinators within a landscape of increaslingly intense cultivation.

Urticularia stygia: Ex-situ cultivation
A third project is devoted to the ex-situ conservation of a carnivorous aquatic plant, which is rarely found locally: the Utricularia stygia. Trauttmansdorff cultivates the plants from a population that existed in Lake Caldaro up until 2010, with the aim of reintroducing them into their native waters.

Ornithologic Survey
The Trauttmansdorff's fourth project is centred on surveying the avian Fauna at the botanical garden, and began in 2018.