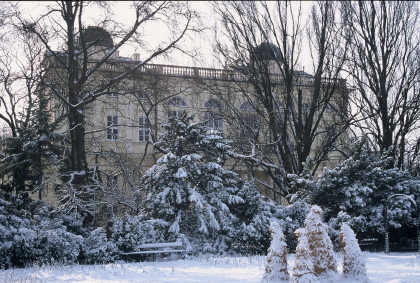 About the Warsaw University Botanic Garden

The Botanic Garden was founded in 1818 thanks to the efforts of the botanist, Professor Michał Szubert. Located in the former Royal Gardens in the northern part of the Royal Łazienki Park, the Garden occupied 22.5 hectares. Royal greenhouses along with the Old Orangery became at that time parts of the Botanic Garden. The founder of the Garden divided its area into three parts: scientific – devoted to plant systematics, pomological, where a collection of fruit trees was established to educate future gardeners, and a leisurely one for public use. Owing to Szubert and his coworkers’ devotion and hard work the Botanic Garden that enjoyed great renown outside of the country was soon established. In the index of plants grown in the Garden published in 1824, over 10,000 species and varieties could be found, including 1000 representatives of the Polish flora. Further development of the Garden was stopped after the November Insurrection had been put down. In 1831 the Royal University of Warsaw was closed and the Garden’s area was reduced by 3 (such a reduced area is occupied by the Garden today). In 1846 Michał Szubert was deprived of his position as head of the Garden and replaced by the senior gardener Ignacy Hanusz. That was the beginning of an end of the fast developing institution. For many years managerial posts were taken up by tsarist officials. At that time the Garden evolved into an interesting place not only to the press, but also to the police. In 1916 the Garden became a part of the re-established University of Warsaw. Professor Zygmunt Wóycicki took up a position of head of the Garden and started his work vigorously. He established new sections: plant biology, ornamental plants and a rose garden. Also at that time a renovation of greenhouses was started. In 1919 the eminent plant taxonomist and geographer Bolesław Hryniewiecki became head of the Garden. Under his supervision all greenhouses was modernised and centrally heated, while trees and shrubs collections extended. The Garden regained its former scientific and educational glory. However, the greatly developing institution suffered a terrible blow – WWII. During the Warsaw Uprising in 1944 all buildings and greenhouses were ruined and the park became a cemetery of former rich collections. Nevertheless, after the war new enthusiasm and hope to rebuild the Garden could easily be found. Professor Bolesław Hryniewiecki and Dr Roman Kobendza together with Dr Wacław Gajewski started a long and hard work on the Garden’s restoration. In a few years’ time all buildings and greenhouses were rebuilt and the works on reconstructing the collections began. In 1960 Dr Ludmiła Karpowiczowa became head of the Garden. Being totally committed to her work, she managed to raise funds necessary to maintain the Garden. Due to her involvement, in 1965 the University of Warsaw Botanic Garden was recorded on a list of heritage registers of Warsaw. After the death of Ludmiła Karpowiczowa in 1973 the time of lethargy and stagnation came. Once again the Garden struggled with the lack of funds and it was gradually losing its importance. In 1987 Dr Hanna Werblan-Jakubiec took up the position of head of the Garden. The section of plant biology regained its historical form while the collection of roses, climbers, medicinal plants and useful plants were modernised and enriched. Furthermore, greenhouses have been renovated and extended. The main fields of research in the Garden have been focused on its main function – protection of biological diversity. Hence, for several years now it has been important for many members of the academic stuff of the Garden to do the research on local populations of threatened species in the north-east Poland. Moreover, new collections of endangered Polish wild species and rare of varieties ornamental trees and shrubs are being created. For over 10 years new fields of research have been developed, including: floral, pollination and nectar biology as well as evolution of reproductive systems and ethnobotany. For many years the stuff have been involved in educational and popularising activities. Information boards and educational paths alongside leaflets, booklets and guides that broaden the knowledge of plants grown in the Garden serve that purpose. The Garden plays also an important role in the protection of endangered plant and animal species that are included in the CITES list and are protected against being traded. The most important tasks of the Garden in that respect are education and popularising the knowledge of CITES, organising training for police and customs officers as well as establishing new collections of plants included in the convention. Our garden is not only the area where plants are grown. Our collections can also be found on the Internet. On the FLORATHECA website a data base with botanical illustrations from our archives has been opened to the public. The base includes photographs, graphics, drawings and press cuttings that have been digitalised and described by historians of art and biologists. Besides information of the technique used and the origin of the material one can find there also botanical descriptions, including a contemporary name of a plant and its taxonomic affinity. Floratheca is made of two separate collections – Flore Tropicale and Roman Kobendza’s Photographs.