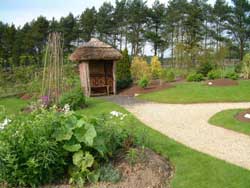 The RHS merged with the Northern Horticultural Society in 2001 and, with the merger, came the acquisition of Harlow Carr.

The Northern Horticultural Society was founded in 1946 with the objective of 'promoting and developing the science, art and practice of horticulture with special reference to the conditions pertaining to the North of England'. The Society leased 10.5 hectares of mixed woodland, pasture and arable land at Harlow Hill from Harrogate Corporation and opened the Harlow Carr Botanical Gardens in 1950.The chief aim was to set up a trial ground where the suitability of plants for growing in northern climates could be assessed. The original 10.5 hectares has been extended to 27.5 and the merger with the RHS will ensure that Harlow Carr becomes a premier botanic garden in the North of England.

The gardens stand on what was once part of the Forest of Knaresborough, an ancient royal hunting ground. Springs of sulphur water were discovered here in 1734 but development of the site as a spa did not take place for over a hundred years. In 1840, Henry Wright, the owner of the estate, cleaned out and protected one of the wells and four years later built a hotel and a bath house. People came to bathe in the warm waters for which they were charged 2s 6d (12.5 new pence). Gardens were laid out around the bath house and in 1861 the site at Harlow Carr springs was described as a 'sweet secluded spot...the grounds neatly laid out, adorned with a selection of trees, shrubs, flowers, walks, easy seats and shady arbours'.

The hotel remains as the Harrogate Arms and the bath house now houses the Study Centre. The building was converted in 1958 and contains a meeting room (which doubles as a lecture room), the Library and offices. The well heads in front of the bath house (at one time six wells were in use) were capped off but remain beneath the present Limestone Rock Garden. At certain times the smell of sulphur in this area is quite distinct.